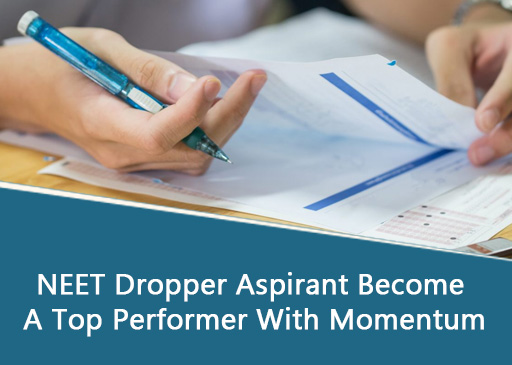 There are millions of medical students who want to pass the NEET exam. In most cases, these candidates begin their preparations for the tests as soon as they start their first day of classes in the 11th grade. Momentum, an institute that provides top Medical Coaching in Gorakhpur, can assist you with achieving your goal of cracking NEET.

All of these applicants, however, will not be successful on the first try. The NEET is one of the most complex medical entrance tests, in which more than 15 lakh students compete for a limited number of seats in MBBS. As a result, this indicates that the competition is tough, and you should seek only the Best Medical Coaching in Gorakhpur to prepare for this.

There are a large number of competitors who fail the NEET during their first attempt and drop a year or two in order to pass it on their second attempt, something that happens every year. If you are one of those learners, don't give up because you're not alone. In this world, everyone gets a second chance to prove themselves and succeed. In the past, many dropouts have been able to top NEET on their subsequent attempts. In addition, there are several inspiring examples of NEET droppers who studied at our institute and are now practicing medicine.

The National Eligibility Cumulative Entrance Exam, also known as the NEET, is a national-level test held for students wishing to enter Undergraduate Programs such as MBBS, BDS, and other similar programs in medicine at top medical institutes. The NEET Dropper is anyone who failed to pass the NEET on their first attempt and has taken a 1-2 years gap to study for the test thoroughly. A NEET Dropper should not lose hope after going through the tough preparation it takes to pass the exam. Instead, they should be ready for it better this time.

Those who drop out of the NEET in a year are also known as re-attempters. This means that students who fail the NEET a year later are the same individuals who re-attempt the test. As a result, such students are often referred to as NEET Repeaters.

Here is what they can consider achieving better marks this time:

Consider your past NEET scores as a starting point:

In order to find out where you made a mistake after the test, you need to go through the paper in order to see where you went wrong. Compare your answers to the answer key in order to find out where you have a weakness, such as what ideas you have provided incorrect responses to, so you can work on improving them. You will be much more able to evaluate what preparation errors you made once you clearly understand this concept.

First and foremost, we need to understand that missing a year due to NEET is not harmful or embarrassing in any way. Instead of feeling embarrassed, people who have dropped out of NEET should be proud of their willingness to work hard to succeed. In spite of this setback, they should not give up hope because of this. Do not let this make you feel inferior to other people, and do not let yourself fall into the trap of self-sabotage. If you persevere, you will be successful in your endeavors.

Make sure you examine the mistakes you have made in previous preparations:

When you have completed the first phase of your preparation, you will be able to identify areas that require a little more attention or areas in which you fell short of your preparation expectations. After determining your skills and areas of weakness, you can choose whether you would like to self-study or have a coach work with you.